When A Failed Kickstarter Leads To A Successful Product KDS: 024 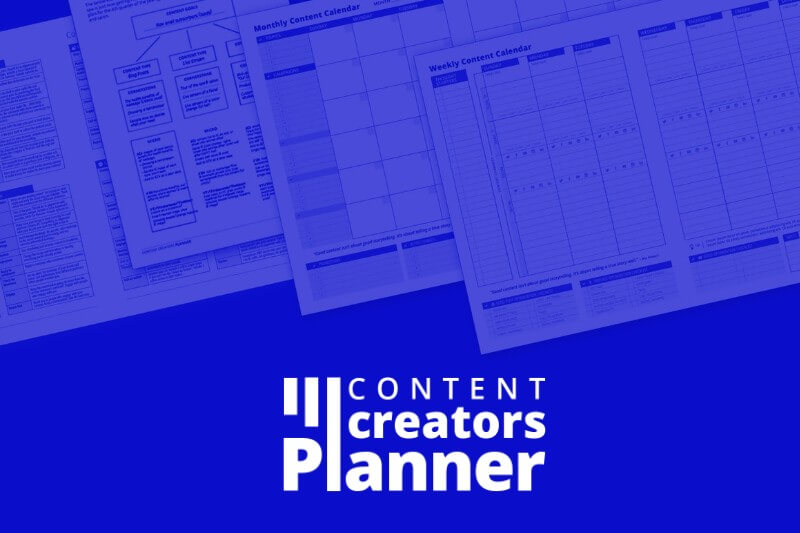 Nothing like starting the New Year off with a failed success, right?

I know, that’s a bit of an oxymoron, but hang with me, it will make sense.

Don’t get me wrong, I have plenty of so-called ‘failures’ (and yes, I’m one of those people that believes all failures happen for a reason and they’re not really a failure as long as we learn from them), but it’s rare that we get to see those failures turn around so quickly.

Or that it wasn’t a failure at all … it was simply a wrong turn.

Let me back up a bit and start at the beginning.

The failed Kickstarter I’m referring to is the Content Creators Planner, just in case you’re not sure what I’m referring to (which, if that’s the case, is a clear testatment as to part of the reason it failed).

Honestly, somewhere in my mind, I had this idea that we had to do something like Kickstarter to pre-sell the planner (as opposed to pre-selling it ourselves).

I had done a decent amount of research on other planners that had been funded via Kickstarter and it seemed like the smart decision.

I had also read quite a bit about how to set your funding goals, but most said the same thing: set your funding goal at the lowest possible amount you need to get your project off the ground, which makes sense. Our initial funding goal was going to be a little less than what we ended up choosing ($20k). The reason we rose the amount was after having spoken with one printer we realized we needed to factor in some additional costs:

Not that it made a huge difference (we came close to $6k).

The other challenge with Kickstarter was simply that we launched on December 3rd.

Trust me when I say that I’m just as aware as the next person that December isn’t really a great time to launch things (although if you believe everything you read in the internet marketing space there’s never a bad time to launch, but I digress), but we moved forward with it thinking it would be great to get the planner into people’s hands as early as possible into the New Year.

The Kickstarter started off with some great momentum, but as we got closer to the holidays it started slowing down.

I had already had some wobbly moments where I started playing the old stories in my head (here we go again…), fortunately, I couldn’t hang out in that space too long because I had work to do.

I also knew we had (have) an amazing product.

I remember specifically when I decided we should pivot from the Kickstarter to pre-selling through our website. It was after we ran the first 3 live streams teaching how to use the planner (more on that later).

We had two more to go but it was also the two days prior to Christmas weekend (Christmas was on a Tuesday last year and these last two pieces of training were going to take place on the Thursday and Friday prior).

But, watching the attendance decline each day as we got closer to Christmas I felt like we needed to make a decision. So I did (unbeknownst to Jodi, who as I said in the last podcast episode, is immensely patient with me. haha).

I doubled checked the terms on Kickstarter to make sure we could start messaging people to place their pre-order through the website and we jumped in and got WooCommerce set up, integrated with everything we needed and moved all the rewards over to the site just as they were on Kickstarter.

Right after Christmas I personally messaged all of our backers (one by one) to pivot and buy through the site. We were still in the thick of the holidays (we were now going into New Year’s weekend), but I didn’t care. I knew that the people who loved the planner would be thrilled that we were moving forward with it.

Long story short… I didn’t know better in terms of NOT doing a Kickstarter and I naively thought it was going to be easier than it was (not creating the Kickstarter, but getting it out there and marketing it).

So, you might be asking yourself where this ‘successful product’ is?

I’m getting there, but I want to talk about my marketing epiphany first.

As much as I’d like to tell you that this epiphany was one specific moment in time, it wasn’t.

This has been a few years in the making.

Mid-2016 I made a very conscious decision to go back to basics and focus on the fundamentals. I was coming off the tail-end of a high ticket mastermind (they have their value, I’ve talked a lot about this in other episodes so I won’t go into a ton of detail here), had invested in working with a Facebook advertising agency (Jason Hornung, who is fantastic at what he does and the ads and service were profitable) and I was burned out.

I felt like I was on the hustle wheel (entrepreneurs version of the hamster wheel) and wasn’t doing anything I was enjoying.

I got so caught up in ‘high ticket’ sales and offers that I found myself with a business that had too much overhead and very little joy.

It would take me a while to pivot out of all of that, but it happened.

I decided I was going to focus on:

These are all things I’ve talked about in other episodes as well, so most of you know I’m a huge fan of ‘doing the work’ (i.e, stop planning to plan), but one thing I don’t think I’ve focused on enough as I’ve discussed this is something that is priceless:

Who you become in the process.

Meaning, you start seeing the results of your efforts.

More traffic, more sales, better quality leads. All of it.

I’ve never been one to shy away from doing the work… sort of.

Because truthfully, it depends on the work.

Creating content and ‘showing up’ hasn’t ever really felt like work for me. Well, the showing up is subjective too, but I’ll save that for another episode.

Ever since I was a little girl I’ve been someone who needs to create. So much so that I will own that I have talents and strengths in this area. Most importantly, I love doing it.

The work that I’m not super fond of?

I’ve gotten much better at both in the past couple of years, but I can say without a shadow of a doubt that neither has gotten the attention they deserve. Could I hire someone for these things?

But good copywriters are expensive (as they should be) and I never quite felt like I had my offers ‘dialed in’, which gets in the way of selling.

Not to mention we get the message shoved down our throats that we have to ‘sell without selling’. For the love of ALL that is good in the world, can we stop acting like we’re not supposed to sell things?

Let’s all agree to stop perpetuating this message.

If you do your homework and really study selling (good selling), copywriting, and the psychology of why people buy, you’ll stop thinking that making an offer instantly turns you into a creepy used car salesman circa 1978.

Nor does it mean you have to behave like the “Wolf of Wallstreet”.

Create something that solves a problem for your audience and make the damn offer.

Whether or not it succeeds out the gate does NOT mean you don’t have something of value that people need and want to buy from you.

Which is why our ‘failed Kickstarter’ is actually a successful product.

We received massive market validation that this is something people want. We had plenty of people message us through Kickstarter asking if we didn’t hit our funding goal would we still be moving forward with it? Um, hello.

All the presales coming through the website also dictate otherwise.

So, what really happened?

This is the marketing epiphany in a nutshell.

I have never given enough time and energy to marketing . My ‘ready, fire, aim’ is great for testing things, but I know better now.

We had an insanely short timeline for the planner: we went from idea to Kickstarter launch in literally 3 months.

Again, this wasn’t from a desperate “we have to sell something” place, it was from “omg, this is amazing, let’s get it into people’s hands as soon as possible” place.

We simply did not give ourselves enough time to market and get the word out.

Knowing what I know now, I don’t think I’d ever run a Kickstarter again. Not because it doesn’t work, but because we’re doing just fine on our own. Pre-selling isn’t anything new in this space, I have an audience, and there’s no point in giving away a percentage of sales.

We did a very short test of a Facebook ad and initially had some great numbers, but we didn’t run it long enough to know if it was going to really do what we needed to do (a friend helped with this and we knew what kind of numbers we needed to hit in order to reach our funding goal). I turned the ad off as soon as we made the decision to pivot to selling directly off our site.

I will be turning the ad back on soon, but it’s to drive traffic to our website.

The other ‘oh so obvious’ piece of this?

We simply need more people to see it.

Which takes time and money.

This entire experience was a HUGE wakeup call to me. So often I’ve gotten frustrated because I do something (i.e, make an offer) and don’t get the results I want and I make up stories as to why it didn’t work (you know the stories I’m talking about right? All the negative nonsense that happens in your head and does nothing but rob you of time and energy that could be spent elsewhere).

I feel like I’ve solved the missing piece of the puzzle.

This is literally only the beginning of the Content Creators Planner. We’re in this for the long haul and want to help our customers get out of their own way when it comes to creating content. We believe in this 100%.

O.K., so I know a lot of this feels intangible, so let me give you a better rundown of what this means and looks like in terms of the work that we’re going to be doing.

(and for what it’s worth, I’m doing this planning and outlining as I create this podcast post, so this is where #everythingiscontent comes into play. I could just do this offline, but I’m doing it in a podcast and accomplishing a specific task for my business).

Now that most of the foundational work is done (creating the product, the website, getting validation), the brand building and marketing really begins.

As I’m finishing up this post, we have a handful of things to dial in that should stay in place at least through version 1 (we don’t have a definitive plan on version 2 yet, this will start to take shape after we have more people using the planner)

Here are our primary areas of focus for the remainder of quarter 1:

So… needless to say, we’re going to be busy.

We’re beyond excited about this planner and are anxious to get it into as many hands as possible.

Get the Content Creators Planner Here
Posted in Podcast