To say I was excited about this interview would be an understatement.

I literally remember anxiously waiting for “New Kajabi” to release in late 2015 (it literally launched in December of 2015). It felt like the longest launch ever, but only because of the way they shared the behind-the-scenes journey and process of getting the new platform ready to use. Even though I knew I was going to be jumping in when they finally opened the doors, I still felt a little guilty. At the time I was still running ‘The WordPress Chick’ so it kind of felt like I was cheating.

At the same time, I knew I was pivoting towards more content marketing (at the time I didn’t know I’d be moving completely away from The WPChick) and wanted to spend more time creating and promoting and less time dealing with the tech. As much as I love WordPress, I didn’t want to deal with piecing things together (I guess this was the writing on the wall that I was pivoting away from The WPChick). 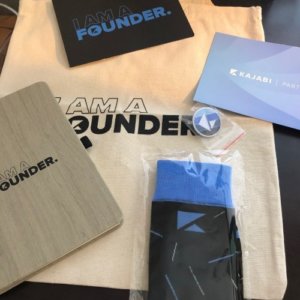 One of my favorite things about Kajabi is how they take care of their members, especially their Founders. In the fall of 2016, they rolled out ‘Founders Fridays’, where they gave all the Founders access to new features first. It was such a cool way to thank people who jumped in when they launched. It was simply a ‘give’ to say Thank You. And I know, I’m probably not the most impartial person since I am a Founder, but still… I have yet to see another company do this. Kajabi has found a way of bringing personality and voice to their brand in a unique way I haven’t seen done anywhere else.

Since I became a Kajabi Founder, they’ve made massive changes to the platform.

You’re going to hear all about the releases they’ve made this year, but one of my favorite updates is simply the new UI.

And did I tell you they’re adding a community feature too?

It literally just keeps getting better and better.

So, as a little ‘side note’, this interview was done via Facebook Livestream. Anytime I don’t need to share screens I’m going to do as many repurposing of live streams for the podcast as possible.

That being said, le’ts jump in!

Where to Connect with JCron & The Kajabi Team