I don’t know about you, but even as an entrepreneur I look forward to Friday.

I know, I know… when you do what you love you’re not supposed to feel that way. Or if you don’t like Monday’s you need to do something else.

When my week is full (like it has been this week), I LOVE Friday.

I know it’s the start of some time to myself.

A little respite, time to refuel, time to checkout or time to get inspired (by not being on the computer).

Maybe that’s why when I was recording this week’s episode of the podcast I was a little extra goofy. I don’t have any calls scheduled (well, I have one call with my daughter at 1 to record an episode of her new podcast coming in January. Apple doesn’t fall far from the tree 😉 ), but other than that, the day is mine.

I purposely keep Monday and Friday blocked off from calls or appointments (doesn’t mean that I don’t schedule things on these days, it just means I have options).

Which was a good thing because I had to record my podcast this morning so I could get it published today (still rendering as I write this).

I’ll be sending that link tomorrow, but I have to warn you I was a little punchy, but it’s packed with some good info. on monetizing your brand (I mapped out exactly how I’m monetizing The WP Chick and Hustle Free).

Because we all need leverage.

As an example, when I created the new lead magnet for the site (1 Page Marketing Plan), I used Canva for the infographic and then decided to do an accompanying audio.

Podcasting is a big part of my brand and who I am.

I love being able to connect with my audience through this medium. I have a ton of fun doing it, I get to talk with awesome people and it helps me “show up” in a way that wasn’t as easy to do just by writing.

But this isn’t about podcasting.

Yes podcasting is audio content, but you don’t need to do a podcast to produce audio content and get some leverage from it.

I’ve decided I’m going to be adding transcripts to the podcast (that will be a post in and of itself) so right off the bat I end up with 2 pieces of content from one recording.

Let’s break it down even further. For my solo shows I write the post first, then use it as a guideline to record (mind you…. I don’t always stick to closely to the guideline. With the way I talk the transcripts may be hard to follow with the solo shows).

So then I have a:

Let’s drill down a little more…

I can also create a Clammr (24 second sound bite to be shared socially and on the Clammr network, something I’ve dropped the ball on this year).

Then I can take the podcast and submit it to YouTube (there’s a great tool for making this really easy to do).

I can also pull key takeaways from the podcast episode, put it into a PDF and offer it as a content upgrade.

Now we have 6 pieces of content from one episode:

… makes me a little tired thinking about it, but you can batch these things.

My point in sharing this is that the goal is to get leverage from what you create.

A lot of people avoid audio because they think it’s too complicated or involved (or don’t like the sound of their own voice… which you’ll get over pretty quickly if you stick with it).

I’m happy to tell you it’s not complicated at all.

Earlier this year I switched over to a web app to record my solo shows. I was using Adobe Audition but wasn’t super happy with the sound (and didn’t want to master Audition).

The tool (which as a FREE plan), is called Zencastr. 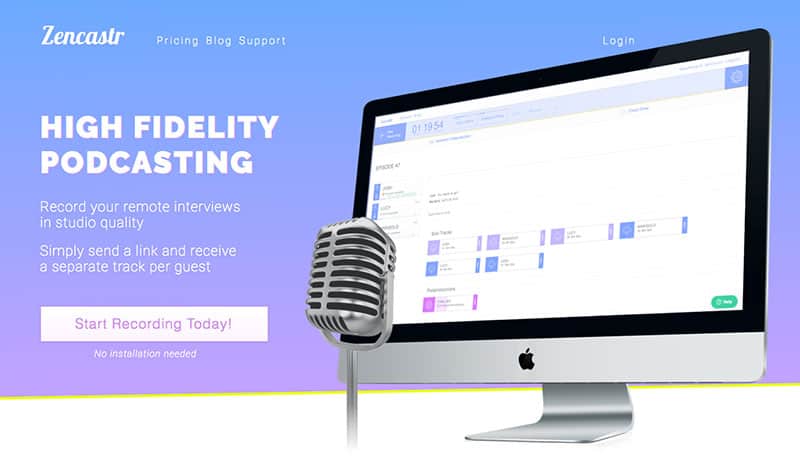 Holy moly do I love this thing!

They have a new version that just came out of beta that I’ve been recording with recently and am floored at the additional options (they’re finally releasing a paid version, but most people won’t need that. They have editing, post production capability and have added intro./outro options, which I haven’t played with yet).

You can also use it with Skype to record interviews (and get two separate wav files of you & your guest, which I then recommend you give to your editor).

It syncs with dropbox so once it’s done your files are automatically updated.

I would suggest creating the audio version first then get it transcribed you now have two elements to your lead magnet (the more ways you give people to consume your content the better).

I believe Zencastr will always have a free version (which again, is probably plenty for most people), so you really don’t have much to lose.